VPN (From the English. Virtual Private Network, which, TRANSLATED INTO RUSSIAN, means "virtual private network”) is a technology that provides one or more network connections over another network. Simply put, VPN is a connection between two networks or an individual user and a network.

In principle, what VPN is and without any explanation is clear: the abbreviation VPN stands for Virtual Private Network, that is, a virtual private network. Therefore, IF you think about it, you can come to the following Conclusions:

Obviously, this is some kind of LOGICAL group of network nodes, the traffic of which is completely isolated from other network nodes at the link level.

Well, if the network is private, that means it's not public. That is, one in which there is not just anyone, but only allowed nodes.

A network is a combination of two or more nodes by some kind of communication so that they can exchange information.

Therefore, you can connect to this virtual private network, but why? The fact is that the feature of VPN is to encrypt traffic, and also that due to this technology, you can access the network from anywhere in the world. This way you can anonymously bypass geographic Internet censorship.

@darkstack — the official Telegram channel of the DarkStack blog, in which you will find even more useful information about security and anonymity than here OR on any other web resource in Runet.

All information is provided for informational purposes only. Neither the editors nor the autor ARE RESPONSIBLE for any possible harm caused by the materials of this article.

If STILL IS NOT UNDERSTANDING, then imagine the following situation: you need to get to a party, but the security does not let you in, because you are Russian, and only Chinese can enter. Well, a VPN is a disguise, so after activating it, the guard will let you through, because he will sincerely think that you are a real Chinese.

VPNs can be roughly divided into the following two types:

In this article, we will consider the first type of VPN. Moreover, perhaps even I will tell you about how to RAISE a virtual private network. That is, its own, completely controlled and absolutely anonymous.

The history of VPN technologies begins in 1996, when a Microsoft employee - Gurdeep Singh-Pall, began the development of "PPTP" - peer-to-peer tunneling protocol. Well, in 1999, this specification became available to the general public and EVOLVED over time. 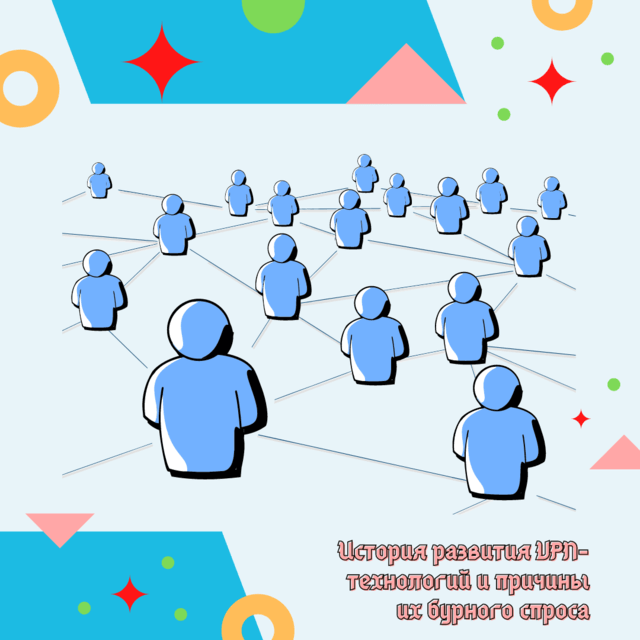 However, such a useful technology as VPN did not stay in the shadow of large companies for long, because over time, censorship appeared on the Internet, new tools for hacker attacks, and Big Brother surveillance became tougher. And as a result, all this led to strong growth VPN services market.

For example, in Russia, before the law on anonymizers, the SPRING LAW and the law on the “sovereign Internet” were issued, few people knew about VPNs. Then Roskomnadzor blocked Telegram and now almost every second resident of the Russian Federation has a VPN.

The general principle of how personal VPN connections work

VPN Service Providers deploy virtual private networks on servers, customers pay a monthly fee of $5 to $10 and then connect to these servers at the expense of VPN clients. At the same time, setting up your own VPN server is cheaper and safer than ordering this service from merchants.

Well, after you connect to the VPN SERVER using a VPN client, all traffic will be encrypted, and your real IP address will be replaced with the server address. At the moment, there are the following types of encryption:

Any of the above types of encryption will make it very difficult for attackers to intercept and read sensitive data. And yes, an encrypted connection provides increased anonymity. But this does NOT mean at all that it will be impossible to deanonymize you at all.

Ordinary users of the Internet still DO NOT SAVE from surveillance by Big Brother. However, this technology can be very useful for you to bypass censorship and protect personal data in coffee with open Wi-Fi networks.

All possible advantages and disadvantages of VPN technologies

Luckily, VPN technologies have a lot of disadvantages. lessthan benefits. Although, if you take some specific VPN services, as well as their main stack, then most likely there will be more minuses than pluses. Well, all these shortcomings are usually related to security and anonymity.

Much depends on the type of encryption, logging, as well as on the conscientiousness of the administration of a particular VPN service. They can only promise complete anonymity and at the same time quietly transfer the necessary logs to the special services.

There is no such thing as too much security

I already wrote above that even IF an attacker intercepts your data, he will not be able to do anything with them. The same applies to providers, and all kinds of analytical scripts, etc. Well, a VPN in conjunction with Tor and a good firewall will make you practically invulnerable.

Unfortunately, in many countries of the world there is a qualification, which can be easily bypassed using VPN. For example, in Russia it is impossible to access the LINKEDIN website, because it was blocked by Roskomnadzor. However, you can stupidly turn on the VPN and go to it under an American IP address.

Business people in ties, intelligence agencies and various evil corporations are greedily monitoring all our activities on the Internet, for the purpose of control and financial gain. But VPN, TOR, Bitcoin and other technologies and open source programs will protect you from these "defenders".

VPN does not provide 100% anonymity

On many websites, you can find information that VPN networks provide 100% anonymity. However, for some reason, nowhere is it written that every second web resource in Russia makes a digital fingerprint of the browser. And no VPN will save you from these DIGITAL PRINTS.

It seems to me that this is bullshit, because among really good VPN services, I have never come across slow virtual private networks. That is, I download any packages and repositories at normal speed, and I also watch any HD movies WITHOUT problems.

Some websites are blocking VPN traffic

Many web resources in Europe and the USA have scripts that calculate VPN TRAFFIC without any problems at all. As a rule, such scripts first look for the user's IP address in their database, and if it matches, then the script simply kicks the user out of the web resource.

Often, when it comes to VPNs, I mostly receive rather primitive questions in the mail. For example, “what is the best VPN service to choose and how much it will cost” OR “in which country to purchase a VPS SERVER in order to later deploy YOUR OWN virtual private network on it.”

For this reason, I decided to touch on this topic so as not to muddy you and myself. However, if you have ever used a VPN before, then you can skip this section of the article, because you will not learn ANYTHING NEW from it.

— Why You Shouldn't Use Free VPNs?

A FREE VPN is only a tidbit at first glance, but in fact, this kind of VPN has a huge number of disadvantages. For example, data transfer limits, limited number of servers, severe vulnerabilities, slow connection, etc.

— How much should a VPN cost on average??

On average, the cost of a VPN is $5. At the same time, for the same amount you can purchase a simple VPS-SERVER. However, in this case, you will have to work hard, so it is much easier to order this service on some site.

— Which VPN is best for Russia?

In Russia, it is better not to use Russian VPN services, because by law, all anonymizer providers MUST provide user logs at the request of special services. Fortunately, foreign VPN services are not under the jurisdiction of Russia, so DO NOT ORDER any VPN in Burzhunet.

I hope I have more or less clearly explained what a VPN is, what it is for and how to use it. Of course, in this article, I did not touch on topics such as cross-device tracking attacks, hidden networks, etc. It’s just that this is beyond the scope of this article, but I will DEFINITELY write about it in future posts.

And in general, it’s not very nice when the provider sees traffic, reads DNS requests and knows much more about your interests than you do. For this reason, nowadays it is IMPOSSIBLE to remain anonymous online without a VPN or TOR. Therefore, I do not recommend neglecting this technology.

PS Well, let's end this. If suddenly you have any questions for me - feel free to write them UNDER this article in the comments. Well, if the question is delicate, then you can write me an e-mail.

Comments on the entry: “What is a VPN and how to use it?"

DarkStack is a blog about hidden networks that aims to promote traffic encryption and circumvention tools.