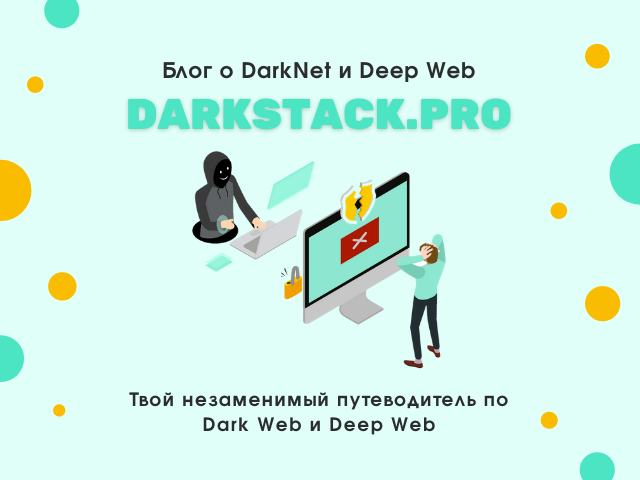 Hello! My name is Vladilen, I am a crypto-anarchist and also an adherent of the use of strong cryptography. In this blog, I share KNOWLEDGE in areas such as anonymity and security, and also in my free time I publish the results of research in the field Surface Web, Dark Web и Deep Web.

In real life, of course, my name is different, and I don't do hacking. My main direction is web programming, because it is this activity that brings me great pleasure, as well as money.

My goal is to promote traffic encryption, ways to circumvent censorship, and the use of strong cryptography to protect privacy and personal freedom on the Internet. I am convinced that if all people knew what prospects provide hidden networks and the blockchain system, then this world would be very different.

In this regard, I started this block. Who knows, maybe I will never be able to convey to the masses the essence of using hidden networks. However, at least I will be laying the foundation for something useful in the future.

The history of the birth of this blog

In the summer of 2014, I read a book by Peter Ludlow called Crypto Anarchy, Cyber ​​States and Pirate Utopias. From it, I learned that everything is going to the fact that in the near future there will be not only dark markets, of which there are plenty on the Dark Web, but also an underground economy, uncensored content and the complete absence of surveillance by big brother.

This topic became interesting to me and I began to eagerly search for information both in RuNet and in Burzhunet. For 5 years, I read dozens of books on anonymity and security, and also tested all this knowledge on a daily basis in real practice.

I would especially like to highlight the following books:

Well, so, my roof just blew off after reading all these books and I decided that I urgently need to start a blog. I had a strong desire to share my knowledge with those who would be interested in this direction just as I was.

Then at the beginning of August 2019, I set about developing this blog. At the time, I was doing it with the Laravel PHP framework, Vue.js, and UIkit. Then he wrote several articles and published it on the Internet in mid-November. I don’t know what was wrong with him, but visibility in Yandex was completely absent, so six months later I transferred my blog to WP.

As a result, visibility in Yandex appeared 10 MONTHS after the Blog was created. Now I publish new and update old articles weekly. I hope that something worthwhile and worthy of your attention will come out of this.

Main Goals of the DarkStack Blog

It's no secret that drugs are sold and child pornography is distributed on the Dark Web, but in this blog you will not find ANY LINE on these topics. I respect the laws of the Russian Federation and am a patriot of our country. Moreover, if I could, I would personally destroy all these sites, because they are ruining our people.

This project was created to promote traffic encryption, and not to promote drugs and child pornography. In this regard, I will block everyone who will somehow touch on these topics in the comments.

I just want users of the DarkStack blog to know that on the Internet, unlike in real life, you can remain anonymous. That is, write whatever you want, without fear that someone will ask for it. Now even for reposts in the social. networks are planted, and also blocked sites AT THE TOP LEVEL, violating Article 29 of the Constitution of Russia.

It’s just that at first they began to block anonymizers, then they banned Telegram, and in 2023 the Yarovaya Law will come into force. Telecom operators will store our telephone conversations, SMS messages and traffic for 6 MONTHS.

Webcams have been deployed all over Moscow, which identified people without any problems during the quarantine. In Belarus, the autorities tor network banned and EVEN DISCONNECTED THE INTERNET during the riots. Yes, and all kinds of evil corporations, hackers and scammers are also on the alert. Well, according to the news, they deliberately keep silent about some things.

All this for GOOD PURPOSES, but I and the vast majority of you have not broken the law in your life. For this reason, traffic encryption in our time is very welcome and in this blog you will find everything you need for this.

In my blog, I don’t call anyone to anything, I just write about what I know and nothing more. You must understand that engaging in any illegal activity carries with it certain RESPONSIBILITIES. And don't naively believe that you're smarter than the guys from Office "K" (Division of the Ministry of Internal Affairs of Russia).

Even on the official Whonix website (Debian-based Linux distribution formerly known as TorBOX) it is written that the Tor anonymous network WILL NOT HELP if any law enforcement agencies are looking for you.

In this regard, I HIGHLY recommend using software designed for anonymity only for your own safety, as well as to protect confidential data. The law does not prohibit anonymizers and hidden networks, but this does not mean that they can be used with impunity for personal gain.

PS Hope you don't get bored here. If you have any questions for me, please email me. mail: email@darkstack.pro or just contact me via the CONTACT FORM in the "Contacts" section.